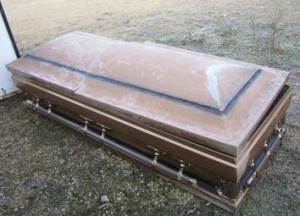 The mystery of a casket found along a roadside in south central Wisconsin has been solved.

Adams County sheriff’s deputies say the owner came forward Wednesday, a day after they went on Facebook to announce what they called a “creepy” discovery.

The casket’s photo was seen and shared by a quarter-million people around the country. Someone who knew the owner saw the Facebook post and helped solve the mystery.

The sheriff’s department would not identify the owner, saying he asked for privacy. But officials said he was transporting the casket from a Halloween haunted hayride when it fell off a boat he was pulling. It’s now back with its owner.