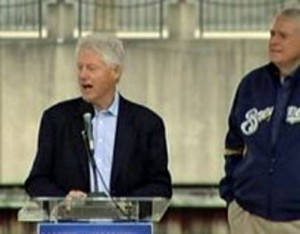 One of the Democratic candidates for president is sending her husband into Wisconsin to help raise some campaign money.

Former President Bill Clinton is scheduled to make a stop in Madison next week for a noon-hour fundraiser at the Madison Club, located just blocks from the state Capitol building.

An invitation to the event asks for a donation of at least $300.

Clinton herself was last in the state in September, when she made a campaign stop in Milwaukee.