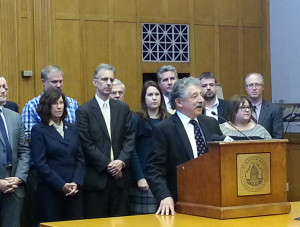 After nearly a century of operations in Madison, Oscar Mayer has announced plans to close its historic production facility in the city. Kraft-Heinz announced Wednesday that it will wind-down work at the more than 100-year-old Oscar Mayer plant in Madison over the next 12 to 24 months, with production moving to a new facility in Davenport, Iowa and corporate personnel relocating to Chicago.

In a statement, company spokesman Michael Mullin said the decision follows an extensive review of operations throughout North America, and the Madison facility is one of just seven that will cease operations over the next two years. “We have reached this difficult but necessary decision after thoroughly exploring extensive alternatives and options,” Mullin said.

The announcement caught many people off-guard. State Sen. Fred Risser (D-Madison), who briefly worked at the plant before joining the Navy in World War II, noted that a lot of people have spent much of their life with the plant. “It’s like a death in the family,” he said.

State officials also expressed surprise at the decision, noting that the company had not given any indication it was considering the move. Wisconsin Economic Development Corporation spokesman Steven Michels said “Along with everyone else, WEDC first learned of Kraft Heinz decision to close their facility today. We reached out to the company today and are ready to work with our partners at the local, regional, and state levels to assist the workers in identifying employment opportunities.”

The plant, which Oscar Mayer purchased in 1919, currently employs about 1,200 people, although Madison Mayor Paul Soglin said the impact of the decision will like have an impact throughout the region. During a news conference, Soglin compared the closure to General Motor’s decision to close its Janesville plant in 2009. “The ripple effect to parts suppliers, raw materials suppliers, throughout south central Wisconsin, was extensive,” he said. “It’s not just limited to the plant site itself.”

Soglin and other local officials said they hope to provide support to the many workers who will be seeking new jobs, while

expressing optimism that a strong local economy will help many of them find work. “We do have manufacturers in Madison and Dane County who are right now looking for skilled workers,” Soglin said. “I don’t think this is going to be as bad as we saw the GM closing in Rock County…and so many other cities who’ve lost major important manufacturers.”