You are here: Home / Sports / Parker & Ennis could return to action Wednesday 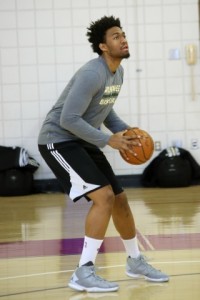 The Milwaukee Bucks say forward Jabari Parker and guard Tyler Ennis have both been medically cleared to return to action on Wednesday when the Bucks host the Philadelphia 76ers at the BMO Harris Bradley Center.

The news couldn’t have come at a better time.  The Bucks have struggled out of the gates.  They’re 0-3 for the first time since 1976.

In 25-games last season, Parker averaged 12.3 points, 5.5 rebounds and 1.7 assists a game.  He earned Eastern Conference Rookie of the Month honors for October/November and was the first teenager in over 30 years to record multiple double-doubles in his first three career games.  Parker underwent season-ending knee surgery on Jan. 5 after suffering a left knee ACL injury at Phoenix on Dec. 15.

The 21-year-old Ennis averaged 3.7 points. 2.2 assists and 1.1 rebounds in 33 games last season with the Bucks and Suns.  He was acquired from Phoenix on Feb. 19 in a three-team trade that also brought Miles Plumlee and Michael Carter-Williams to the Bucks.