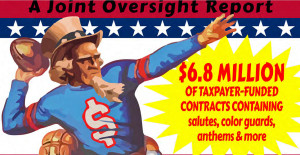 A newly released report shows Wisconsin sports teams cashing in on Pentagon contracts. It’s called “paid patriotism,” and U.S. Senators John McCain and Jeff Flake have detailed contracts between the Department of Defense and teams across the country, totalling $10.4 million between 2012 and 2015.

The Green Bay Packers netted $200,000 last season for things including a pregame party deck package for 200 Wisconsin Army National Guard members and their families. The Milwaukee Brewers were paid $80,000, including $49,000 for the Guard to sponsor each Sunday performance of “God Bless America” during Brewers home games. And the University of Wisconsin received $170,000 for activities including football and hockey game day presentations, signage, announcements, and radio broadcast recognition.

According to the report, the UW contract was between the Wisconsin Army National Guard and Learfield Communications. Learfield is the parent company of Learfield Sports and Wisconsin Radio Network.

Details of the contracts, contained in the report:

• $49,000 for WIARNG to sponsor each Sunday performance of “God Bless America” during
Brewers home game with announcement and logo recognition on the video board (FY2014)
• $10,000 for a promotion to recognize soldiers and their families and provide 12 vendor passes
during each of four Brewers home games (FY2014)
• $7,500 for 12 field-access passes for WIARNG members to perform an on-field award
presentation and throw out the ceremonial first pitch before three Brewers home games, and
a private suite rental for two of those games (FY2014)

The Packers have a long and proud history of recognizing and supporting the men and women of the US Military. This support includes care packages, community service projects to benefit veterans, National Guard send-offs and change-of-command ceremonies, and GI Joe vs. Pro events. On gamedays, our recognition has included re-enlistment ceremonies, drill team performances, military music performances of the national anthem, salutes to military personnel and video board visits with military personnel overseas. Most of these recognition elements have been done without a formal partnership like the one we had with the Wisconsin National Guard.

Our partnership with the Wisconsin National Guard was similar to our partnerships with other organizations. It is comprised of many different features, including traditional marketing aspects to address the National Guard’s goals of recruiting, retention and awareness. It has also featured advertising on the video boards, stadium signage and Packers.com, as well as sponsorship of other programs and events such as the high school coach of the week, a job fair for veterans and a continuing medical education program. Our partnership arrangement does not simply focus on one specific event, but is comprised of many different features.

NFL Commissioner Roger Godell sent a letter to the U.S. Senators on November 2 in regards to this report. “We are conducting an audit of all contracts between our clubs and the military service branches or state National Guard Units. If we find that inappropriate payments were made, they will be refunded in full,” Goodell said. Senator McCain suggested Wednesday that any refunds go to veterans causes like Wounded Warriors.