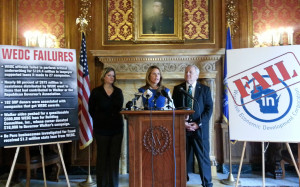 The bills come in response to several high profile cases involving the Wisconsin Economic Development Corporation, in which companies received or applied for state funding under circumstances that later raised questions. State Rep. Chris Taylor (D-Madison) said the situation has shaken the trust of taxpayers. “WEDC was supposed to be this economic engine of the governor, and of this state, and create hundreds of thousands of jobs. Instead, it’s really become synonymous with corruption, cronyism, and incompetence,” she said.

One of the bills would make it a felony for a business owner or operator to commit fraud while pursuing economic development assistance from the state, such as lying or omitting important information on application materials. It would also ban those found guilty of defrauding the state from applying for any further assistance for seven years – a nod to a bill recently passed by the Assembly that places a similar penalty on those who commit unemployment insurance fraud. State Sen. Dave Hansen (D-Green Bay), a co-sponsor, said “we have to have something in place that tells these companies that not telling the facts on their applications is just not acceptable.”

The bills are part of a growing push by lawmakers to address issues at WEDC, which has been the focus of several critical state audits and seen a revolving door of top leadership since its creation just a few years ago. Assembly Speaker Robin Vos (R-Rochester) this week told the Milwaukee Journal Sentinel this week he’s open to the possibility of rebranding the agency, but many Democrats argue an entirely new approach may be needed. “Republicans want to rebrand it, Democrats want to disband it,” Taylor said.

A message seeking comment from Vos’ office was not immediately returned.