You are here: Home / News / Johnson says he will support GOP presidential nominee 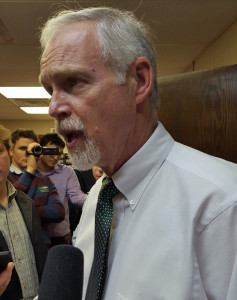 While some in his party have voiced concerns about the possibility of Donald Trump being the Republican Party’s presidential nominee, one of Wisconsin’s US Senators said Monday that he will back the candidate the party ends up picking.

Senator Ron Johnson (R-WI) has moved to distance himself from Trump’s anti-Muslim comments, saying last week that he denounces demagoguery from both sides of the political spectrum. When pressed by reporters on Monday during a stop in the Madison area, the Wisconsin Republican would not say if that means he views Trump as a demagogue. “I don’t call people names…obviously, certain statements by certain candidates I would view as demagoguery, when we’re getting away from the facts and reality…and well thought out policies.”

As for whether he would back Trump as the party’s nominee, Johnson would not directly say he would. He stressed that he has faith that Republican primary voters will select a person of integrity, intelligence, and courage…which he will then support. “I’m certainly not going to support the Democrat one,” he said.