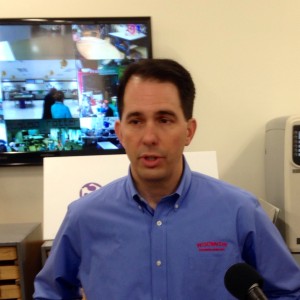 Governor Scott Walker is arguing there are some big differences between his stance on blocking Syrian refugees from entering the country and Republican presidential candidate Donald Trump’s call to ban Muslims from coming in to the U.S.

Walker was one of several Republican governors last month who called for stopping Syrian refugees from entering the country, due to concerns about terrorism. Trump used a similar rationale this week in calling for a ban on allowing all Muslims into the country.

During a stop near Chippewa Falls Tuesday, Walker argued they are different issues though. The governor said religious liberty was a founding principle of this country, and Trump’s position uses religious beliefs to distinguish between who is allowed into the country. “I think we need to remember that our founding principles were based, in part, on protecting religious liberties, and so I disagree with him on that,” Walker said.

Walker has continued to defend his stance on the U.S. halting the program that admits Syrian refugees into the country. He said that position is based on concerns about the instability of the region, and the possibility that radical Islamic terrorists could use the process to slip into America. The governor and others want a more detailed screening process in place to help identify any possible ties to terrorist groups. “That has nothing to do with people’s religious beliefs and everything to do with an appropriate screening process based on safety,” he said.