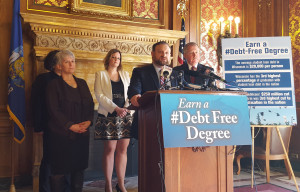 Assembly Democrats are calling for the state to study how to help Wisconsin college students graduate debt-free.

During a news conference at the Capitol Tuesday, Assembly Democrats noted that an estimated 70 percent of Wisconsin college graduates are leaving school with student loans, the third highest rate in the nation. State Rep. Cory Mason (D-Racine) said it amounts to average of almost $29,000 in debt per student, which he argued is unsustainable. “The student debt held in this country now stands at over $1.3 trillion and rising. In this state, that’s $19 billion worth of student loan debt,” he said.

A trio of Democratic lawmakers argued those rising debt levels are a good rationale for returning to a model that promotes a debt-free higher education. They are proposing a joint resolution in the legislature that would call for the formation of a “debt-free college commission.” The panel – made up of higher education, workforce development, and economic experts – would be charged with exploring ways the state can provide more assistance to college students and lowering costs at colleges and universities. Assistant Minority Leader Katrina Shankland (D-Stevens Point) said many of those are areas cut by Republicans in recent years, contributing to the problem.

Democrats warned that the continued crisis is already having an impact on the economy. Rep. Dana Wachs (D-Eau Claire) said students are graduating burdened with debt, making it unlikely that they will buy a house or purchase a car. “I feel that we owe it to our children and to the future of Wisconsin’s economy and workforce to invest in higher education and make it more affordable,” he said.

The proposal is one of multiple efforts Democrats have promoted this session to address concerns about the climbing rates of student loan debt.