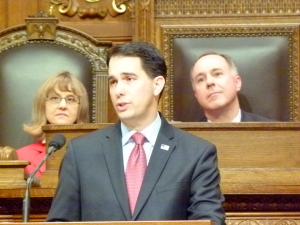 Governor Scott Walker has signed two controversial bills into law, which will overhaul the state elections agency and make a number of changes to Wisconsin’s campaign finance laws. The governor’s office said Wednesday afternoon that Walker signed both bills earlier in the day at the Capitol.

The bill eliminating the state Government Accountability Board splits the agency into two new commissions – one that will oversee elections issues and another that will deal with ethics, campaign finance and lobbying regulations. Members of both commissions will be selected by both parties.

Walker’s office indicated he used his partial veto authority on the bill to “ensure that the Governor’s office receives an adequate number of nominations for the commission appointments of county or municipal clerks and former judges.” The full details of the veto have not been released.

Republicans have maintained the current GAB, which was created in 2008, was granted too much power. They have said that power has been abused through investigations targeting conservative lawmakers and political groups, and the new structure will make sure oversight of elections and ethics laws is more transparent.

In a statement, GAB director Kevin Kennedy said the agency and its staff stand ready to work with the administration on the transition to a new system, which will have elections and ethics issues overseen by separate commissions. “We are professionals who care deeply about serving voters, local election officials, candidates and officeholders, and the lobbying community. Our commitment is to ensure continuity of service during the transition,” he said.

The campaign finance changes include doubling contribution limits to candidates, clarifying limits on corporate contributions to political parties and committees, and codifying in state law the ability for candidates and third-party issue advocacy groups to coordinate their efforts. Republicans argue the measure is needed to address a series of court cases that have called for changes to campaign finance laws, but critics have said the bill is designed to hide who is funding political campaigns in the state and will open Wisconsin to a flood of special interest spending in elections.

Democrats moved quickly to criticize the governor for signing both bills out of public view. Senate Democratic Leader Jennifer Shilling (D-La Crosse) called it “disappointing that Governor Walker and Legislative Republicans continue to undermine our state’s proud tradition of clean, open and honest government instead of focusing on ways to move Wisconsin forward,” while Assembly Democratic Leader Peter Barca (D-Kenosha) said “under Republican rule, Wisconsin is open for corruption and our era of clean, open and transparent government is over.”