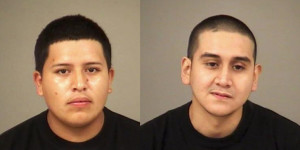 Beloit Police have identified two persons of interest they are seeking, in connection with last Friday’s fatal shooting of a five-year-old boy.

During a press conference Wednesday afternoon, Beloit Interim Police Chief David Zibolski asked 21-year-old Eric Salazar-Mota and 23-year-old Sergio Ortiz-Raygoza to turn themselves in to authorities. He noted that both local and federal officials are looking for the two men. “I would urge their families, associates, and friends to have a conversation with them and convince them the only logical move for them is to turn themselves in, because we will not stop looking for them until we find them,” Zibolski said.

The two men are being sought in connection with the death of Austin Ramos Jr., who was fatally shot last Friday night while riding in the back seat of his father’s car. Zibolski said officers have worked tirelessly since then to investigate his death – adding that “as the family prepares for tomorrow’s funeral, I hope they find some solace in the progress that has been made thus far on the case and believe…that we will identify those responsible and bring them to justice.”

Police announced earlier in the day that 24-year-old Isaac William Torres was also being held on an outstanding felony warrant in McHenry, Illinois as another person of interest in the case. Zibolski said they are working on extraditing Torres to Wisconsin.