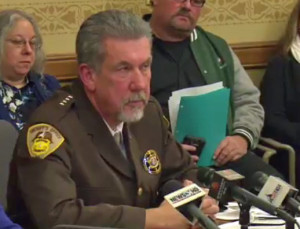 State lawmakers want changes in how forfeiture procedures for property seized during criminal investigations are carried out.

Under current law, police can begin those efforts almost right away, if they can show it was linked to a crime being committed. State Representative Dave Craig (R-Big Bend) wants them to wait until someone is convicted. “Requiring a conviction ensures that the due process guarantees of the Constitution are followed,” he told a legislative committee on Tuesday.

Law enforcement agencies are allowed to sell the property, with a portion of the proceeds going to fund their operations. The rest of the money goes to schools.

Eau Claire County Sheriff Ron Cramer warned cutting off those funds could have a dramatic impact on their budgets. He testified the money generated from property seized during drug crime investigations is what helps them continue those efforts. “Without this…I wrap up our drug unit,” he said.

Supporters of the bill raised concerns that police departments could be abusing the forfeiture process, and making it difficult for those even associated with a crime to reclaim their property once it has been seized. Cramer said there is a process set up for people to get their property back, and noted it is only seized in relation to felony level cases.

The bill is currently awaiting a committee vote.