You are here: Home / Legislature / Democrats ‘underwhelmed and frustrated’ by State of the State 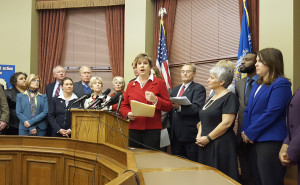 Democrats respond to the State of the State. (Photo: Andrew Beckett)

Democratic leaders in the Wisconsin state legislature argue Governor Scott Walker’s State of the State address failed to deliver solutions to many of the major issues most residents in the state care about.

Walker’s speech focused heavily on education funding, college affordability, and workforce development, although Senate Minority Leader Jennifer Shilling (D-La Crosse) said the governor did not show any “sense of urgency” for issues facing the public every day, such as job losses and struggles with student loan debt. “I left the chamber feeling underwhelmed and frustrated,” she said, shortly after Walker delivered his speech Tuesday night at the Capitol.

Assembly Democratic Leader Peter Barca (D-Kenosha) also criticized the governor for failing to address the state’s struggling schools and crumbling infrastructure. “Those are things that the people of Wisconsin care deeply about…these are the things they talk about at their kitchen table,” he said.

Both leaders also panned Walker’s college affordability efforts, such as increasing tax deductions for interest paid on loans. Democrats have repeatedly pushed for a plan this session that would set up a state-backed system to help graduates refinance their student loans, which they argue would actually address the billions in debt many in the state are carrying.

Republicans have questioned whether such a system would actually provide lower interest rates. Shilling described the GOP alternative though as “weak tea” that only “nibbles around the edges” of the greater problem facing the over 800,000 Wisconsin residents with student loan debt.