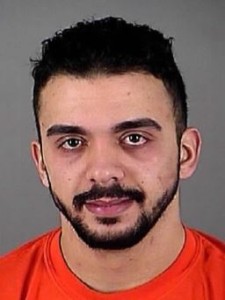 The FBI says agents have interrupted a plan for a mass shooting in Milwaukee. According to a criminal complaint, 23-year-old Samy Mohamed Hamzeh hoped to target a Masonic Temple in Milwaukee.

Hamzeh had been under investigation since September 2015, and had allegedly planned to travel to the West Bank, and attack Israeli soldiers and citizens there. Hamzeh later abandoned those plans and began to focus on a domestic attack, settling on the Masonic Temple. Federal prosecutors are charging Hamzeh with the illegal possession of machine guns and a silencer. He bought two guns and a silencer from undercover FBI agents Monday.

According to an FBI press release, Hamzeh was recorded making comments about the planned attack to a pair of confidential sources.

“Thirty is excellent. If I got out, after killing thirty people, I will be happy 100%… 100% happy, because these 30 will terrify the world.”

Acting United States Attorney Gregory J. Haanstad said, “Samy Mohamed Hamzeh devised a detailed plan to commit a mass shooting intended to kill dozens of people. He also said that he wanted this mass shooting to be ‘known the world over’ and to ‘ignite’ broader clashes. It is difficult to calculate the injury and loss of life that was prevented by concerned citizens coming forward and by the tireless efforts of the FBI and the Joint Terrorism Task Force.”