You are here: Home / Legislature / Lawmaker looks to shift focus of anti-heroin efforts in Wisconsin 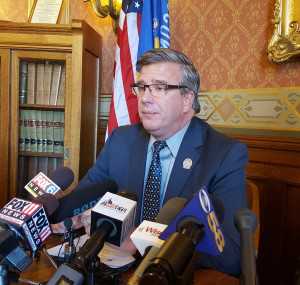 After taking steps last session to address growing concerns about heroin abuse in the state, a state lawmaker is hoping to bring attention to an area that is often a gateway to opiate addiction.

State Rep. John Nygren (R-Marinette) has led that charge on legislative efforts to combat opiate abuse, which are largely inspired by his daughter’s own struggles with a heroin addiction. The Marinette Republican says her problems started though with prescription painkillers, which are often easier to access and can steer addicts towards heroin down the road. Nygren says those drugs are often prescribed legally and obtained legally by many eventual addicts.

The Assembly this week approved four bills that are part of Nygren’s continuing HOPE agenda to fight heroin addiction. The measures include requiring pain and methadone clinics to register with the state, creating a database for doctors to check that will help track prescription narcotics, and requiring police to log prescription drugs evidence found at crime scenes.

All four passed on voiced votes and now head to the state Senate.

Nygren says there needs to be an ongoing discussion about the dangers of prescription drug abuse and notes that the U.S. accounts for 80 percent of the opiate drugs taken worldwide, despite only representing a fraction of the population. “We’ve got a problem, and we need to begin to have a dialogue with our children and our doctors,” he argues.