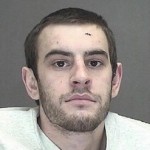 Formal charges have not been filed. Boucher was expected to appear in court Monday afternoon. Police said a vehicle driving northbound on Packerland Drive was struck by an SUV traveling westbound on Oakwood Drive at about 9:40 p.m. Friday.

Both people in the vehicle traveling on Packerland Drive died at the scene. They were identified the victims as 52-year-old James C. Rush and his wife, 47-year-old Wendy L. Rush, both residents of Hobart.