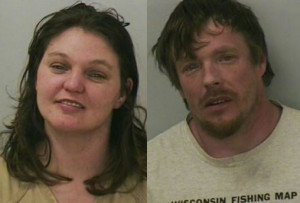 A Wisconsin woman and her boyfriend have been charged with felonies, after police say they let the woman’s nine-year-old daughter drive their truck because they were too drunk to get behind the wheel themselves.

A report from the Polk County Sheriff’s Department shows deputies responded to a call of an erratic driver on January 31, eventually catching up with the vehicle after it was parked at a public boat launch along the Apple River. Officers found two adults in the vehicle, 33-year-old Amanda Eggert and 36-year-old Jason Roth, along with a nine-year-old girl and the couple’s 11-month old infant strapped into a car seat.

According to the report, both adults appeared to be intoxicated and admitted to allowing the nine-year-old to drive.

Eggert and Roth have both been charged with recklessly endangering safety and child neglect. They are due back in court in March.