You are here: Home / News / Rep. Nygren decides against run for Congress 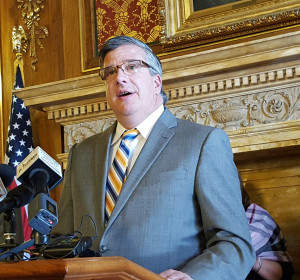 A Republican state lawmaker has decided against running for Congress later this year.

State Rep. John Nygren (R-Marinette), co-chair of the Legislature’s powerful Joint Finance Committee, said the decision ultimately came down to concerns about the impact it would have on his family. “Life is short, you know, kids are young only for a short period time,” Nygren told reporters on the Assembly floor, where the chamber is trying to close out its session for the year.

The seat is currently held by Rep. Reid Ribble (R-WI), who announced earlier this year he would not seek reelection next November – in part so he can spend more time with family. Nygren said he took that reasoning to heart, given the age of his children and a daughter who continues working to recover from a heroin addiction. “At a time when my son is in high school, a daughter is leaving for college, and my oldest is taking great steps in recovery, now is not the time to make the move to Washington.”

The Marinette Republican said it was a still difficult decision because he saw a pretty clear pathway to victory. “That makes it hard to say no to something that you think you can win,” he said.

The only Republican candidate who has announced a run for the seat so far is state Senator Frank Lasee of De Pere.