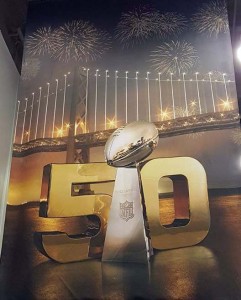 It started Monday night with that used to be called Media Day.  It’s now referred to as “Opening Night”.  It’s the time that any media outlet that applies for a credential gets to ask any question to any player or coach from each team for an hour.

In my experience covering a couple of Super Bowls (Packers in New Orleans and San Diego), this is the day that you can’t be looking for anything concrete in terms of the Super Bowl game itself.  It’s a real circus and almost has to be looked at that way, to not regret your going to begin with.

If you want to talk football on this day, you’re in the wrong place.  Now if you want to find out by Carolina quarterback Cam Newton named his son “The Chosen”, then “Opening Night” is for you.

Both the Panthers and Broncos worked out earlier Monday and the Broncos had a little excitement on the way home by getting into a fender bender.  Nobody was injured.

Most of the real preparation has already been done, with game plans going in last week.  But coaches will keep the players busy enough with some new things this week to keep their mind on the big game.  Those preparations will begin on Wednesday.

Our Super Bowl Reporter Mike Clemens will have updates from California as the week goes on.

AUDIO: Mike Clemens on Monday’s activity at the Super Bowl 1:34