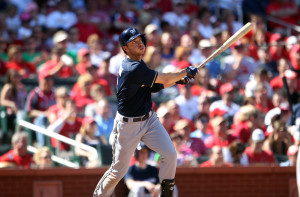 Milwaukee Brewers left fielder Ryan Braun is in the starting lineup for today’s Cactus League game against the Chicago White Sox in Phoenix.

Braun underwent offseason back surgery and has fully taken part in camp to date with today being his first game action.

Braun is scheduled to hit third in Craig Counsell’s lineup today.  Matt Garza gets the start on the mound for the Brewers.  He’ll face left Carlos Rodon.