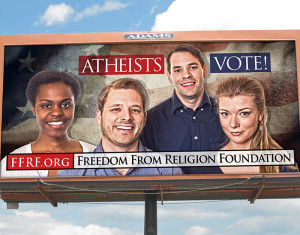 Billboards featuring young atheist voters are up in Madison. Freedom From Religion Foundation has placed its ‘I’m an Atheist and I Vote’ billboards in 12 locations across Madison in advance of the April 5th Wisconsin primary.

The group cites numbers showing religiously unaffiliated adults in America have increased by 19 million since President Obama was first elected, fueled largely by growth of young, secular Millennials like those featured on the billboards.

“Secular voters are highly educated and independent-minded,” said FFRF Co-President Annie Laurie Gaylor in a press release. “They care deeply about women’s rights, environmental protection, marriage equality, and social justice and candidates should be reaching out to them directly.”