You are here: Home / Packers / Peppers says he’s returning for 2016 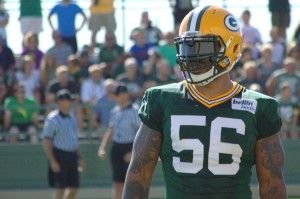 After taking some time to think about his future, veteran linebacker Julius Peppers told the Detroit Free Press that he plans to return to the Green Bay Packers for the 2016 season.

Following the Packers playoff loss to the Arizona Cardinals, Peppers told reporters he wasn’t prepared to make that decision.

Peppers had 37 combined tackles, 10 1/2 sacks and two forced fumbles for the Packers 12th ranked defense.  Peppers is set to count $10.5 million against the cap in 2016, the final year of his contract.

Its expected the Packers will likely monitor Peppers’ reps in practice next season in order to keep him fresh.