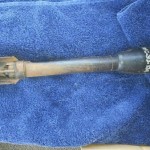 An area around the City-County Government Center in Fond Du Lac was blocked off for a couple of hours Tuesday night after what appeared to be a World War II era bazooka round was brought to the sheriff’s office in the trunk of a car. A resident had discovered the vintage munition in the attic.

The Brown County bomb squad was a called and it was determined that the round had no explosive charge and was intended for training.