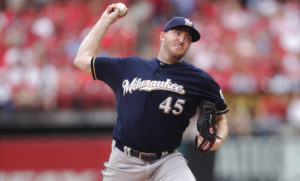 Offensively, the Brewers went 0 for 8 with runners in scoring position and left 11 runners on base.

Cravy remains winless in the majors in nine decisions and was returned to Colorado Springs right after the game, to make room for left-handed reliever Michael Kirkman, claimed off waivers from San Diego on Thursday.  Kirkman will join the team Saturday.

The victory goes to Tim Adleman, his first.  In his second major league appearance, Adleman went five innings, allowing four hits and one run with three walks and four strikeouts.

Jimmy Nelson pitches game three of the series for the Brewers tonight.