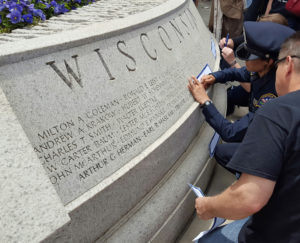 A parade of squad cars from around the state circled the Capitol Friday, as four officers killed in the line of duty had their names added to Wisconsin’s Law Enforcement Memorial.

State Trooper Trevor Casper was killed in a shoot-out in March of last year, while McFarland Police Officer Ryan Copeland died in a traffic crash last November. Joining them were Arthur Herman of the Racine County Sheriff’s Department and Earl Haslam of the Milwaukee County Sheriff’s Department, who both died in the 1920s as a result of injuries received in motorcycle crashes.
State Patrol Superintendent Stephen Fitzgerald said those four join the 274 listed on the memorial “who made the ultimate sacrifice in service to their profession.”

During his comments, Governor Scott Walker praised the sacrifices of those named on the memorial, and urged the public to remember those touched by their lives. “We remember not just the end of watch, but the lives that they each have lived…some far too short, but each leaving a lasting legacy.”

Attorney General Brad Schimel also paid tribute to the families they left behind and those who live with the fear each day that a family member may not return home from work. “Those families know that the dangers are always lurking. The families of our law enforcement officers make sacrifices that we must not take for granted,” he said.