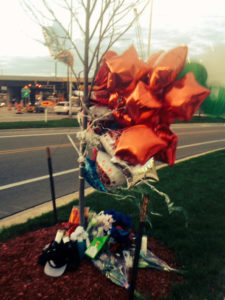 Elected officials in Madison are trying to stem a recent wave of gun violence. There have been three gun homicides since April. The first was on April 19, when 30-year-old Martez Moore was killed outside O’Grady’s Irish Pub. On Tuesday, 38-year-old Darius Haynes was killed outside a BP gas station on the south side. Police said Haynes and Moore were friends.

The latest victim, 28-year-old Elijah James Washington III, was killed outside a Capitol Petro Market in the Town of Madison on Wednesday night. The suspect in that death, 28-year-old Courtney Moore, is considered armed and dangerous. Madison police chief Mike Koval said Courtney Moore is the brother of Martez Moore, and that the most recent shootings seem attributable to retribution.

Town of Madison police chief Randy Gregory expressed his frustrations over the senseless deaths. “We have a 28-year here, who may have just ruined his life. I don’t understand why lives aren’t mattering any more to these people who are shooting and getting shot,” Gregory said.

At a press conference on Thursday, Alder Sheri Carter made a plea to young black men in the community. “Don’t yet let your anger direct your future,” Carter implored. “Take the time to think before you react.”

Police released the names of four persons of interest in the recent homicides, and four more in recent shots fired incidents around the city. All are young black men, as is Courtney Moore.

“This man is 28-years-old. I was elected to the city council when I was 28-years-old,” said Alder Maurice Cheeks, who represents the district where Darius Haynes was slain. “All these young men look like me – more like me than any of the press in this room. And it’s really tragic to me – it’s heartbreaking to think about that the best pictures that we have of them all come from prior interactions that they have had with law enforcement.”

Cheeks and other city council members are preparing recommendations on preventing gun violence through young people in the community. Mayor Paul Soglin was not at Thursday’s press conference but his office said he’ll address the recent violence at noon Saturday at the Madison Central Public Library.

“When you see young men losing hope, it’s because they’ve lost a sense of opportunity,” Cheeks said. “I hope that the public, that our residents, will come together and recognize the dire importance of young men being able to see a life for themselves here.”