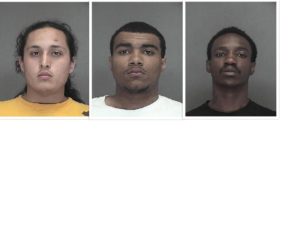 Nine people are facing charges in connection with a shootout at a Green Bay intersection where four homes were hit by bullets.

The Green Bay Police Department said Friday that during their investigation they learned that the shooting incident was related to an armed robbery of marijuana earlier that night.

Police say the series of incidents began in a parking lot at around 9:30 p.m. April 28, when someone fired a gun into a vehicle and stole marijuana.

About an hour later, people in two vehicles opened fire on each other. Bullets struck 4 homes, including one hitting a box spring while a person was lying in bed and another shattering a mirror inside a house. None of those homes hit by gunfire had any relation to the people involved.

No one was hurt by the shootings in either incident.

Cops say one vehicle was driven by a 39-year-old woman, with her 19-year-old son inside. Both have been arrested, with the son also suspected in the sexual assault of a 15-year-old girl.

In all, 3 people  men been charged and six others having charges requested against them: 21-year-old Dominick D. Young, 19-year-old Donovan M. Metoxen (not the man suspected in the sexual assault) and 17-year-old Khaleb W. Thompson have been charged so far.

One of the men involved in the incidents, 31-year-old Enedionea A. “Arthur” Grijalva is still wanted by police.