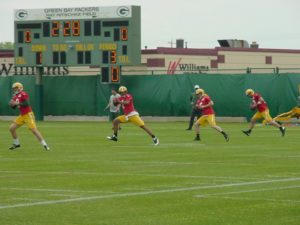 Packers add to their quarterback mix as OTA’s continue.

The Green Bay Packers released quarterback Ryan Williams this week after he struggled during OTA workouts earlier this week.  The former Miami (Fla.) player originally signed a futures deal with the Packers in January.

The Packers now have four quarterbacks on the 90-man roster.