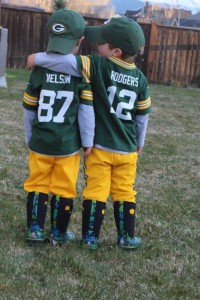 The Green Bay Packers have announced the winner of this year’s Packers Ticket Takeover Contest and it’s a photo of the “Mini Me” versions of Aaron Rodgers and Jordy Nelson.

The photo submitted by Staci Abel of Pray, Montana, won the online fan vote. It features her 4-year-old twin sons, Desmond and Christian, embracing while wearing Rodgers and Nelson jerseys.

“I had two little boys who wouldn’t stand still for a photo. I was running out of daylight, so I gave up and said we were done,” Abel said in a Packers news release. “They walked away, and when I looked up, I caught this nice moment.”

According to the Packers, Abel grew up in Wisconsin, but her family moved to Montana 4 years ago.

Besides having the photo printed on about 80,000 game tickets, Abel and her family will receive tickets to the game, including hotel and flight accommodations.

The Packers play the Minnesota Vikings in the Fan Appreciation game on December 24.

The organization says thousands of photos were submitted for the contest. Five finalists were selected, and a record 63,797 votes were cast to choose the winner.