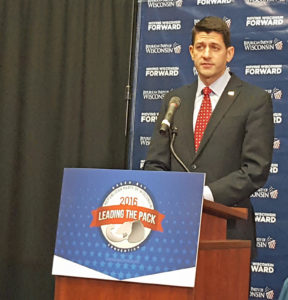 House Speaker Paul Ryan has no plans to lay out a specific timeline for unifying the Republican Party ahead of the November elections.

Speaking to reporters at the Wisconsin Republican Party’s state convention on Saturday, Ryan (R-WI) said the process of exploring what unity looks like to the GOP is an ongoing one. “This takes some time. This isn’t done with a couple of meetings.”

Ryan met with Donald Trump last week for the first time since he became the presumptive Republican presidential nominee. The Janesville Republican said their teams plan to meet again next week to go over policies that “come from the principles that we universally share.”

“It is no secret that Donald Trump and I have had some disagreements,” Ryan said. “That happens with Republicans. The question is, can we put together a process that really actually helps get our party unified so we are at full strength in the fall.”

Ryan said that, based on his meeting with Trump last week, he’s “encouraged with the beginning of this process.”