You are here: Home / Crime / Courts / Victim in Sauk County interstate shooting appears to have been picked at random 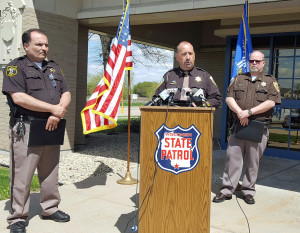 Law enforcement officials say a woman critically injured by a gunshot on Interstate 90/94 in Sauk County over the weekend appears to have been a random target.

The 44-year-old Illinois woman was shot Sunday afternoon while riding in a BMW sedan with her family. Sauk County Sheriff Chip Meister said Monday that the woman’s husband, who was driving the family back from a trip to the Wisconsin Dells, started to pass a Chevy Blazer, when the driver of the SUV rolled down his window and fired three shots into the other vehicle. One of those bullets hit the woman in the neck. There were also two children in the car, who were not injured.

Officials are not identifying the woman at this time. Dane County Sheriff During a press conference Monday Dave Mahoney said she remains in “very critical” condition, and that police believe the shooting was a random act. “Our thoughts and prayers are with this family,” Mahoney said, while also urging anyone who may have witnessed something Sunday to come forward with information.

Police are providing limited details about the shooting, which was part of a broader series of events Sunday that started with the fatal shooting of a 42-year-old man in West Allis and ended with a 20-year-old West Allis man being shot and taken into custody by police on in the interstate near DeForest. Mahoney said officers deployed tires spike to stop the SUV, and the suspect then exited the vehicle and began walking towards officers. He was shot by two Columbia County deputies after ignoring orders to drop the weapon.

Police also took two passengers in the Blazer, the suspect’s 30 and 34-year-old brothers, into custody. They are currently being held at the Dane County Jail.