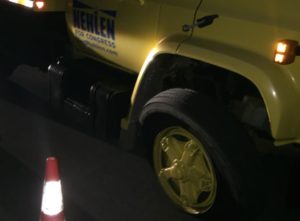 Vandalism to the truck included a flattened tire (Photo: Paul Nehlen for Congress)

A yellow dump truck used by Paul Nehlen’s campaign had a tire deflated and letters torn from the side of the vehicle before Monday’s Rochester Memorial Day parade.

According to Nehlen’s campaign, tape was used to cover a portion of the truck’s message, and trash was thrown in the truck bed. The vehicle, with the message “Dump Ryan” did not make it into the parade.