You are here: Home / News / Wisconsin Democrats lament end of the GAB (AUDIO) 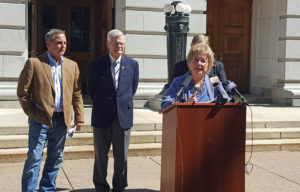 With the Government Accountability Board set to split into separate elections and ethics agencies Thursday, Democrats continue to criticize the shift.

Speaking on the Capitol steps Wednesday, former state Senator Judy Robson, who helped create the GAB eight years ago, said she believes the agency was very successful in its mission. “It promoted fair and free elections, it promoted transparency in government, and fostered the principles of what we believe is Wisconsin – which is squeaky clean government.”

AUDIO: Judy Robson talks about why the GAB was needed, and still is (2:18)

Republicans moved to disband the elections agency last year, which is overseen by a panel of retired judges. Under the new system, separate ethics and elections divisions will be run by partisan-appointed panels, with an even split between Democrats and Republicans. Critics contend that, much like the State Elections Board the preceded the GAB, the new structure will result in deadlocked votes on controversial issues, with no real enforcement action being taken.

State Sen. Mark Miller (D-Monona) said the GAB was not broken, and the change is motivated by Republican’s desire for political control and their desire to settle a “political vendetta.”

The GOP pushed for changes after the agency became involved in a John Doe investigation, which targeted Governor Scott Walker’s campaign and conservative groups. The probe was looking into allegations of illegal campaign coordination, but it was halted by the state Supreme Court with no charges filed. Republicans have argued the split is needed to provide more oversight on how ethics and elections issues are dealt with.

While both parties would have equal representation on the panel, Democratic lawmakers said they would be open to moving back to the current system or something similar, if they were to regain the needed majorities at the Capitol. “Absolutely,” said Sen. John Erpenbach (D-Middleton). “The GAB was the cleanest, fairest way to not only deal with the politicians here in Wisconsin on both sides of the aisle, but also the voting process itself.”

Assembly Democratic Leader Peter Barca (D-Kenosha) said he would also support a move back to independent judges being back on the panel, although he would be open to keep separate panels to handle ethics and elections issues.