You are here: Home / Brewers / Guerra shines in Brewers 7-0 win over the Dodgers (AUDIO) 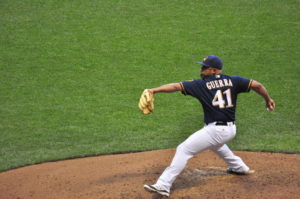 Junior Guerra’s star continued to shine bright on Wednesday night, leading the Milwaukee Brewers to a 7-0 win over the Los Angeles Dodgers at Miller Park.

The Brewers gave Guerra some early runs to work with.  Kirk Nieuwenhuis clubbed a three-run home run as a part of their five-run second inning.  Ryan Braun also homered and doubled, driving in four runs.

Brock Stewart made his major-league debut for the Dodgers.  He started the season in high Class A, but retired the Brewers in order in the first, striking out two.

The Brewers batted around in the second, scoring five runs against the rookie right hander.

Guerra allowed a double and walk in the first inning, then held the Dodgers to a walk and a single over the next seven innings.  He kept the Dodgers in check with his split-finger fastball.

The eight innings pitched is a career high for Guerra, who improved to 5-1 on the season.

Guerra was the first player acquired by Brewers general manager David Stearns.  He was claimed off waivers from the White Sox last October.  The Brewers are 9-2 in games in which he has pitched this season.