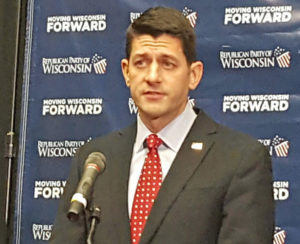 After weeks of behind the scenes discussions, House Speaker Paul Ryan has officially endorsed Donald Trump’s run for president.

After Trump became the presumptive nominee last month, Ryan (R-WI) said he was “not there right now” when it came to accepting him as the party’s standard-bearer. The Janesville Republican’s uncertainty prompted a meeting between the two, as Ryan looked to determine whether Trump would support the agenda of the House GOP.

In a column submitted to his hometown newspaper on Thursday, Ryan said that those meetings have made him “confident” that Trump will “turn the ideas in this agenda into laws to help improve people’s lives.”

Ryan said he now plans to vote for Trump in November. “It’s no secret that he and I have our differences. I won’t pretend otherwise. And when I feel the need to, I’ll continue to speak my mind. But the reality is, on the issues that make up our agenda, we have more common ground than disagreement,” he said.