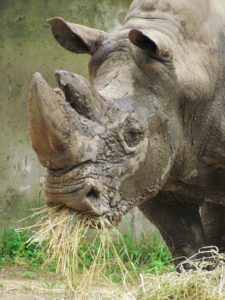 Madison’s Henry Vilas Zoo has lost its oldest resident. George was one of the 10 oldest living white rhinoceros in zoos accredited by the North American Association of Zoos and Aquariums, according to a press release from the zoo.

Recently it became clear to the animal care staff that it was necessary to make the difficult decision to humanely euthanize the 44-year-old rhino due to his deteriorating health and comfort.

George arrived at Henry Vilas Zoo in 1976 with female rhinoceros, Gracie, and was always a favorite with staff and visitors due to his engaging personality.

Gracie died in 2012 at the age of 42, after which George lived as a bachelor rhino. White rhinos are found in Africa and typically only live 20-30 years in the wild. All rhino species are facing pressure from unprecedented poaching and there are only about 20,000 white rhinos left in Africa.

“We will miss George,” Dane County Executive Joe Parisi said in the release. “He was a beloved member of our community. I want to thank our Henry Vilas Zoo staff for their great care of George over the last 40 years. This is a tremendous loss for our zoo family.”