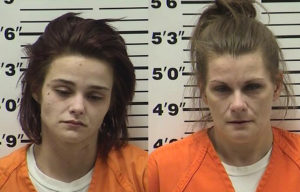 A pair of Chippewa Falls women are facing numerous charges, after leading Barron County Sheriff’s deputies on a high speed chase and forcing the activation of a county alert system.

Sheriff Chris Fitzgerald says it started Monday evening with a call from a WalMart in Rice Lake about two women suspected of shoplifting from the store. A deputy spotted the vehicle, which had been reported stolen in Eau Claire County, and the driver sped off when the officer tried to stop the car.

That started a chase that went on for about four miles, until the car went into a farm field, crashed through a fence and got stuck in a dirt pile. The driver fled on foot, while police arrested the passenger at the scene, 39-year-old Darelynn Dodson.

The driver ran into a wooded area along a river, and police used a K-9 unit and drone to search the area. Officials also activated the county’s Code Red Alert system, which sent out a message to all of the homes within two miles of the crash site. Several 911 calls reported seeing the woman leaving the river just before 8 p.m., who was then caught by the resident of a home she was caught trying to enter. Deputies then arrested 21-year-old Kayla Naser.

Naser is facing charges that include possession of meth, bail jumping, and theft. Dodson faces charges of theft and bail jumping. Both women are being held at the Barron County Jail.

Affiliate WXCE contributed to this report.