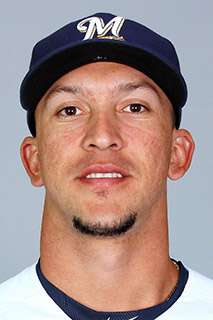 Hernan Perez’s two-run homer in the sixth inning broke open a tie ballgame to give the Milwaukee Brewers a 5-2 victory over the Washington Nationals Tuesday at Nationals Park.

After the Nationals plated a run in the second inning, Aaron Hill singled home Johnathon Villar in the third to tie the game. Perez’s fourth homer of the year in the sixth snapped the tie and Hill’s two run bomb in the seventh provided the winning margin.

The Brewers have won two stratight after being swept over the weekend in St. Louis. The win secures Milwaukee its second road series win of the season with the finale set for Wednesday afternoon.

Zach Davies allowed two runs and nine hits in 6 2/3 innings for his sixth win of the year. The rookie retired 10 in a row before giving up three straight singles in the seventh.

Jeremy Jeffress worked the ninth for his 23rd save.