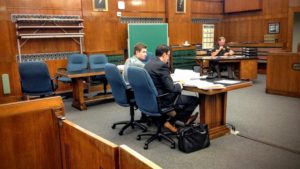 Assistant District Attorney Joel Urmanski said the plea was reached ahead of a jury trial set for this week. “This was not, from my standpoint, a case that was ‘Is this going to be a jury trial or not?’ Although defense could have asked for one, they still had that right. But it was what is appropriate for this individual who is very young, who has no prior record, but was involved in very serious adult behavior.”

Urmanski says he’ll ask for a two year prison sentence and eight years extended supervision. Michener will be back in court for that sentencing on August 30th.

Police interviewed the victims, who reported that Michener had initiated the sexual contact. He allegedly brought one of them to a movie theater parking lot to have sex while the other victim was allegedly assaulted at the church. During an interview with Michener, he allegedly confessed, and told police he’d started having sex with the girls because he’d broken up with his girlfriend.