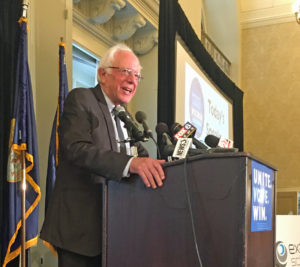 “This is a unbelievably critical moment in American economic and political history,” Sanders said. He said Democrats have to do all they can to defeat Republican nominee Donald Trump, calling him “the worst, least prepared candidate for president in my lifetime.”

“Number two, we’ve got to – obviously – elect Hillary Clinton. Number three, we have to stay focused on our issues, and force every level of government to represent working people,.” Sanders said. “We have to think big, not small.”

Sanders also spoke to members of the Iowa delegation, and hinted he’ll be converting his campaign “into another type of organization which is going to pay a lot of attention to the people, candidates and getting people involved to run for school board, to run for city council, to run for state legislature. We need to do that all over the country.”