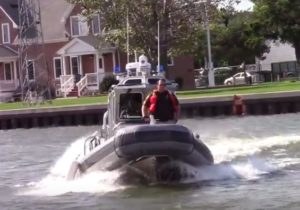 The Sheboygan County Sheriff’s Department has identified two men who drowned, after they were swept off a pier into Lake Michigan by a wave earlier this week.

The Department says 22-year-old Adam LaLuzerne of Sturgeon Bay and 21-year-old Kurt Ahonen of Suamico were found by search crews Monday, a day after they and 22-year-old Dylan Abeyta-Dedecker of Sturgeon Bay were swept into the water by heavy surf. Abeyta-Dedecker survived after a friend was able to activate the emergency call box on the pier and call 911 and the Coast Guard was able to rescue him.

Search and rescue teams were on scene until 9 pm Sunday night, when the search was called off. Crews returned Monday morning with specialized sonar that was able to locate the bodies of LaLuzerne and Ahonen. Dive teams from Sheboygan, Fond Du Lac and Calumet Counties were able to recover the bodies late in the afternoon and brought them to shore.

No further information is being released at this time.