You are here: Home / News / Walker to RNC: ‘America deserves better’ than Clinton 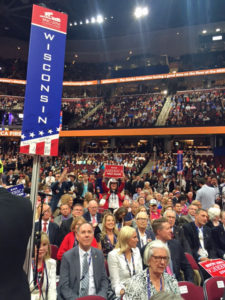 “Donald Trump is standing with the American people. We want a leader who is not afraid to take on the mess in Washington,” Walker said.

Walker spoke on the same stage in Cleveland where he previously promised to support the GOP nominee, whoever that turned out to be. “I said that any of the Republicans running for office would be better than Hillary Clinton. I meant it then, and I mean it now. So let me be clear – a vote for anyone other than Donald Trump in November is a vote for Hillary Clinton.”

Walker said “America deserves better”than the scandal-tinged Democrat. “Hillary’s scandal put our national security at risk, and that . . . makes Hillary Clinton unfit to be president of the United States.”

While Walker was wholehearted in his embrace of the Trump candidacy, the same couldn’t be said of Ted Cruz, the Texas Senator who Walker endorsed in Wisconsin’s Republican primary. Cruz had to compete with chants of “Trump,” as he delivered remarks in which he congratulated Trump for securing the nomination while stopping short of endorsing the nominee and urging Republicans to “vote their conscience” in November.