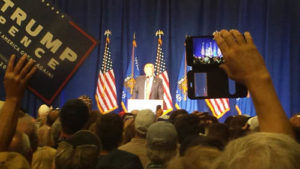 Trump also officially endorsed House Speaker Paul Ryan in next Tuesday’s primary. He called Ryan “a good man,” adding that they while they may disagree on a couple of things, they do mostly they agree.

The billionaire has been under fire from many Republican leaders this week after he said he wasn’t quite ready yet to endorse Ryan in a partisan primary next week. His decision to endorse the Speaker came after most of the state’s prominent Republicans skipped his rally, with many citing conflicts as the reason for not attending.

The rally drew several hundred people out to see Trump speak, while a few dozen protesters stood outside the KI Convention Center.

AUDIO: Supporters and protesters weigh in on Trump (:30)