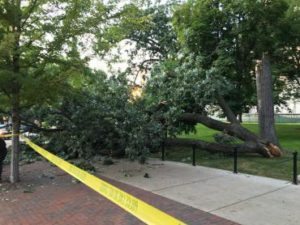 The Madison Fire Department says two people were injured Tuesday, after a large tree on the state Capitol lawn snapped in half and landed on them.

The department says two males were walking along the sidewalk, when the tree suddenly broke apart and fell on them. Witnesses rushed to their aid and pulled both people free.

Both victims were taken to a Madison hospital. Their conditions have not been released.

The area was taped off by Madison police while arrangements were made to remove the fallen tree.