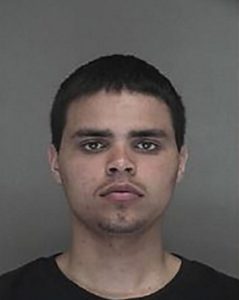 Green Bay police say a man charged in connection with a fire at a vacant bar was hanging out there with neighborhood kids. Eighteen-year-old Jesus Alfredo Castilloveitia-Quinton has been charged with two counts of child abuse, arson, obstructing an officer and jumping bail after an incident at the Ten O One Club Sunday night.

Prosecutors say once inside, Castilloveitia-Quinton kicked and punched the children and made them lay down while he set multiple fires on both floors of the building using a torch and bleach. While lighting the fires he told the children inside, “this is for your own good.”

When emergency vehicles arrived, everyone was able to get out of the building safely. Green Bay police, with the help of a police dog, arrested Castilloveitia-Quinton about two blocks away from the Ten O One Club after a foot chase.