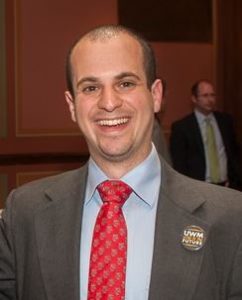 A state lawmaker claims he was forcefully detained by Milwaukee Police Tuesday night, while talking to crowds near the site of an officer-involved shooting that happened earlier this month.

State Representative Jonathan Brostoff (D-Milwaukee) says he was helping to “deescalate” a tense situation in the Sherman Park area, where police had arrested about 10 people earlier in the evening. It happened near the site of violent protests, sparked by the police shooting death of 23-year-old Sylville Smith.

Brostoff says he was talking to people and handing out chewing gum, when police rushed his group and ordered them to move. In the process, Brotstoff says he saw his friend, a legal observer for the ACLU, get taken down by police in a “very violent manner.” As he tried to record the incident with his phone, the Milwaukee Democrat says he was forced to the ground and had his cell phone taken away.

As he was taken to a police vehicle, Brostoff says members of the crowd began to tell officers who he was. A short time later, the lawmaker was released and, after pressing police, his friend was as well. He believes his status as a member of the Legislature and the “privilege” it provides was the reason why, although he notes he doesn’t think they were doing anything wrong at the time police took them into custody.

Milwaukee Police said officers were trying to clear the area after an earlier series of eleven arrests in the area on disorderly conduct charges. Sgt. Timothy Gauerke said that, during that process, it was discovered that two of the individuals arrested were not among the elected officials and community leaders who had made their presence known to police, and they were ultimately released at the scene. “Milwaukee Police are investigating the circumstances surrounding these arrests to ensure proper procedures were followed,” Gauerke said in a statement.