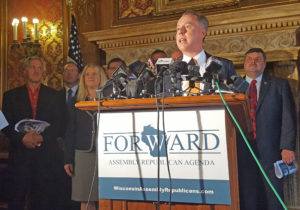 Majority Republicans in the state Assembly are outlining their agenda for the next legislative session.

The plan covers a wide range of topics GOP lawmakers say will be a priority when they return to the Capitol next spring. They include rewriting the state tax code, giving all incoming high school freshmen a laptop, and tightening regulations on vacation rental properties. It also calls for extending a UW tuition freeze for another two years and finding new funding for roads.

“We have an awful lot of good ideas that we want to bring forward over the course of the next several years,” said Assembly Speaker Robin Vos (R-Rochester) during a press conference at the Capitol Wednesday. “In order to keep our state living up to its motto, we need to address some of the problems that we know are still existent in our state.”

Assembly Democratic Leader Peter Barca (D-Kenosha) said he is skeptical of the promises being made by Republicans, arguing that the GOP has already failed to lead on many of the issues over the last two years. “They’ve had so many opportunities to address the issues they’ve brought forward…and they’ve failed in virtually every single metric,” he said.

Barca also said that there are very few new ideas being offered by Republicans. “There’s just no imagination, there’s no boldness, there’s really not even a meaningful agenda on the key issues people care about.”