You are here: Home / Fires/Accidents/Disasters / Cause of Fitchburg home explosion remains unknown 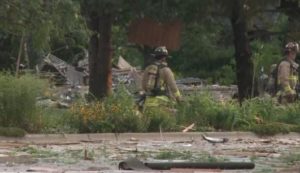 Authorities in Fitchburg still don’t know what caused a home to explode last week, seriously injuring one person and damaging several nearby houses.

Utility providers have found no gas leaks from pipes above or below ground, yet investigators say they are not ruling out gas as a contributing factor. They are ruling out several other possibilities, such as meth production.

During a meeting at Fitchburg City Hall Thursday night, Mayor Steve Arnold said officials are working quickly to get people back into their homes. However, he said people need to be patient when it comes to determining what caused the explosion. “Investigators are searching through dumpsters of collected material, they have many many people to interview…anybody who’s been on the property over the week before the explosion.”

Residents have expressed concerns about asbestos, gas leaks and harmful chemicals from the blast, but Fitchburg Fire Chief Joe Pulvermacher said no toxins have been found in the air or on the ground.