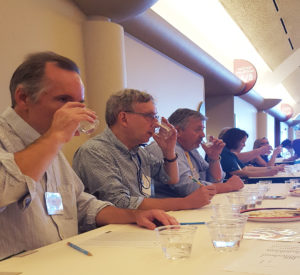 Which Wisconsin municipality has the best tasting water? Apparently, it’s Green Bay – as decided by the judges at the 31st annual Water Taste Test held in Madison on Wednesday

Madison Water Utility spokeswoman Amy Barrilleaux says Titletown claimed its first win in the contest, which is done as part of the Wisconsin Section of the American Water Works Association’s annual meeting this week. She says judges were asked to carefully consider the taste, smell and appearance of each entry.

Mayville claimed second place in the competition, which had more than ten entries.