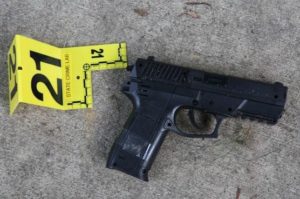 Investigators released this photo of the weapon Kole Knight was carrying when shot (Photo: Wisconsin DOJ)

Investigators say two New London police officers acted appropriately last month when they shot and killed a man after he pulled a toy gun on them.

Police opened fire on 31-year-old Kole Knight in August after he pulled what appeared to be a weapon on officers who were trying to stop him on a sidewalk. Officers Ryan Denu and Brody Erickson had approached Knight because he had several warrants out for his arrest. The two officers fired 17 shots in about six seconds, hitting Knight six times.

The weapon Knight had was later discovered to be a realistic toy handgun, which had the orange plastic safety tip broken off.

During a press conference on Friday, Outagamie County District Attorney Carrie Schneider described the incident as “suicide by cop.” She noted that Knight was suffering from mental health issues and had made comments to friends about wanting to end his life. He had also checked himself in to a hospital the week before the shooting for a mental evaluation, and left the facility against the advice of doctors.

Schneider’s decision not to file any charges follows a review of the incident by the state Department of Justice.